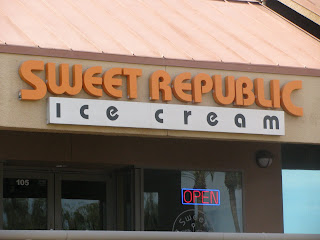 Yes, much more time has passed and I'm finally back to share some cool treats with you guys!!  Things have been crazy busy and I don't always get to eat foods that are worthy of mentioning...and of course when I'm lucky enough to eat something delicious and worth sharing, I am running around and not able to post on my blog.  So FINALLY!! One of faves I have to share is this sweet story of two investment bankers turned artisan ice cream makers! 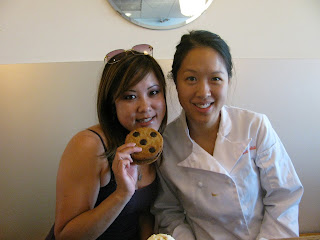 I had the wonderful opportunity to meet Helen Y. and Jan W., the co-owners of Sweet Republic in Scottsdale Arizona.  These girls put a lot of blood, sweat and tears into this beautiful artisan ice cream shop.  They are a green shop, and they put a ton of thought and time into creating their perfect space.  Countless hours spent on what kind of table should be bought, the textures people see and feel when they sit and touch the tables or Braille walls.  The soothing colors, the blend of warmth and modern appeal make this little shop a destination for Arizona locals.  I loved it!

Helen and Jan had no idea who I was and it was because of my friend Sasha that I actually went down there.  You all know how much ice cream means to me.  If you follow my FB page...ice cream is one of the items you'll probably see the most...sick...I know.  I can't help it!  I LOVE ice cream!!!  Anyhow, Sasha is Helen's cousin so she saw that I was in Arizona and said to go check out Sweet Republic.  You know...there is no way in hell that I'd miss a chance to go eat some delicious ice cream!!  I just want to say thank you right now to who ever truly invented ice cream.


Here is a little tidbit of info that I found in Wikipedia that I thought was kind of cool! (no pun intended.)

Maguelonne Toussaint-Samat asserts in her History of Food, "the Chinese may be credited with inventing a device to make sorbets and ice cream. They poured a mixture of snow and saltpetre over the exteriors of containers filled with syrup, for, in the same way as salt raises the boiling-point of water, it lowers the freezing-point to below zero."[6][7] (Toussaint does not provide historical documentation for this.) Some distorted accounts claim that in the age of Emperor Yingzong, Song Dynasty (960-1279) of China, a poem named "詠冰酪" (literally Ode to the ice cheese) was written by the poet Yang Wanli. Actually, this poem was named "詠酥” (literally Ode to the pastry, 酥 is a kind of food like pastry in the western world) and has nothing to do with ice cream.[8] It has also been claimed that, in the Yuan Dynasty, Kublai Khan enjoyed ice cream and kept it a royal secret until Marco Polo visited China and took the technique of making ice cream to Italy.

Well...enough of me talking...let's get to the video!!  You can see the deliciousness in front of me.

A closer look at the Toffee Banofi in the extra waffle cone!  The salted butter caramel really was to die for! 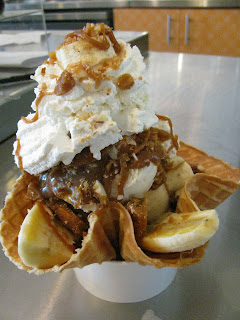 This is by far the coolest looking ice cream sandwich ever! 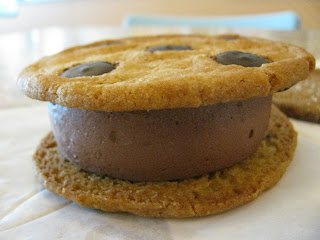 Again, I want to thank Helen and Jan for being so gracious and taking the time to talk to me and Anna and for doing the interview.  And for making that delicious ice cream that is in such demand!!  Their products are also available in Whole Foods...so look for it!!