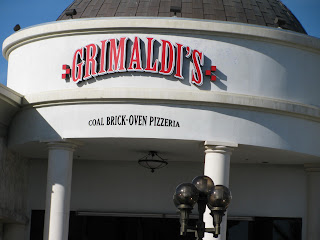 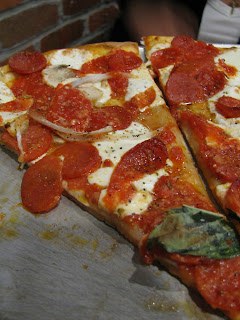 I didn't get a chance to take a picture when it first came out because the guy who came out with the pizza was so quick and started to serve it for us.  First of all, I will say, the service was very good, Marcus our waiter was great.  Polite and attentive.

We had a small group eating so we just ordered one large pie.  Pepperoni on the whole and half with mushrooms and onions.  Normally, when I check out a pizzeria, I always get a plain cheese so that I can really taste the sauce and dough...and get a true sense of the texture of the dough/crust. 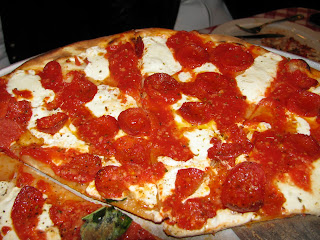 Marcus had come over after we had gotten our pizza and told us that he had told them to hold our pizza since we were still working on our salad.  Our pizza wasn't super hot.  The flavor of the pizza and sauce were nice, the little stubby rounds of pepperoni were tasty.  I think all of us love seeing the string of cheese trail from our mouth to the slice as we take that first bite.  But the cheese was a little tough, like it had melted and cooled down too much and then became chewy. That was a bit of a let down.  Ok...so maybe it doesn't have to leave a trail...but to be chewy...that's a big no no for me.

The crust was a bit too doughy for me, as if it wasn't cooked long enough and sadly, a bit soggy and was wet on the bottom too.  I wish that the pizza was cooked a tad longer.

I know, it sounds like the pizza wasn't the best...and truly, it wasn't.  And to be super honest...even though it had these issues, BUT...I will give them the benefit of the doubt in this one instance and say that they did hold the pizza and did not serve it straight out of the oven.  I would like to go back again and get just a plain cheese pizza and ask them to stretch it out a tad thinner or else cook it a bit longer to get that crust fully cooked.  I know that the potential is there so.  I was watching all the other pizzas come out and they all had just a bit more color to them and looked like they had a bit of crunch to it. Can you tell that I am really trying to be positive and hopeful about this place?  I've heard other friends say that they had the pizza at the Eastern location and that it was great.  Maybe I need to take a drive across town to compare.  Whatever the case...I hope that my next experience, and yes, there will be one...is much better.


I wish this review could've revealed the best pizza in Vegas, but in comparison to what we had in New York, it fell short.  But I do believe it has the potential!  Hey...I didn't even ask our waiter if they ship the dough or the water our from NY.  You know how important that is!

Anyhow...I will return...I can't help it...I gotta see if they can live up to the standards and reputation they created in NY...or as my friend Heather told me...Hoboken, NJ.   I'm rooting for them!!  Because I want some awesome pies damn it!

And if they don't...I am still searching and hoping that someone will bring the perfect pie to Vegas.  Is it possible?
Email Post