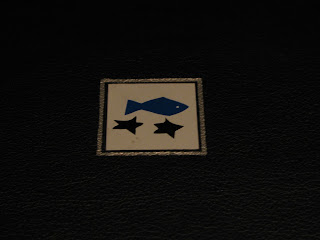 Yes, Dine L.A. has already passed weeks ago, and I am finally just getting to this post.  My bad.  But whatever the case, I still wanted to talk about it.


My thoughts about Dine L.A. are that, for me...it's not necessarily the best thing after all.  Yes, you can try some very exotic or expensive restaurants for a lesser price, but is the food necessarily the best that they have to offer?!  So far, from most of my past experiences, they aren't selling me on coming back.  I don't think these few choice prix fixe dinners are truly showcasing some of these restaurants full potential for great food .  Or at least it hasn't made any of them live up to the hype they have been given in past reviews.  With that said,  I'd almost rather pay full price and see what some of these places can really make and wow my palette.


In this case, I did talk to Chef David LeFevre about our meal after all was said and done....but I will tell you what happened....AFTER I got through our three course meal.  Well, four if you count the amuse bouche.


This was a nice little starter...I believe it was tuna tartar in cucumber, grapefruit, creme, cilantro sprout and wasabi caviar, but it wasn't super strong or overpowering in anyway. 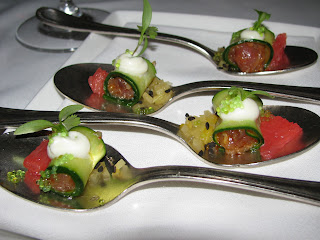 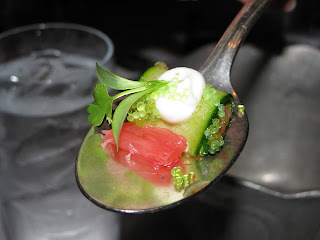 The warm bread was good....my favorite was the onion ciabatta roll.  So much oniony flavor...I of course had to slather it with lots of butter.  After we finished our meal, we asked for more bread.  hehe 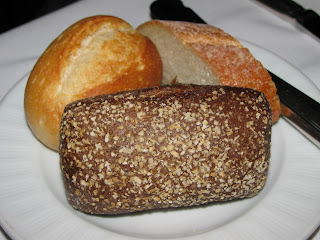 For my first course, I had the Water Grill Clam Chowder with Weiser Farm potatoes and Niman Ranch bacon. 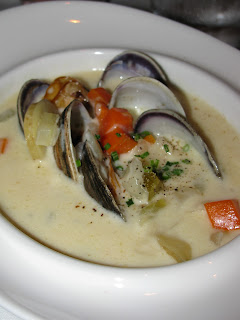 This is not your typical chunky style clam chowder.  This was very elegant, smooth and refined.  I really enjoyed this dish, it had just clean, pure flavors and it was just flavorful and delicious.  This was my favorite dish...I would in fact go back just to get a big bowl of this and have some hot buttered bread...and maybe a salad.  Especially on a cold day!  But obviously not like a day today!  Can you believe how hot it is?!  It was 90 freaking degrees!!  I swear....global warming!  I don't ever remember a day in November where it was 90 degrees in Southern California.  Anyhow... 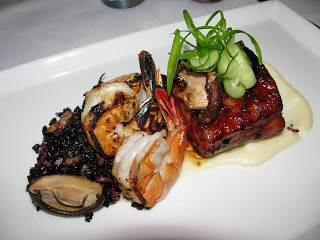 I know!  It's a seafood restaurant!  Why did I pick pork belly?!  Hey!  Ravi and Jo-An did too!  Everything else look so-so to me and you know how much I love the piggy!  How can you resist it when you read Kurobuta Belly?!  Anyhow...the miso glaze on the pork was lovely and I really enjoyed the flavor.  The pork belly was a little tougher than I normally like it.  According to Chef David, I can't remember exactly but, he said that the belly was sous vide for either 28, 34 maybe 48 hours.  I'm having a brain fart right now...but whatever the case, it was a long time.  He also said that some people like it when the belly has a bit more texture and so thus the consistency that it had.

The most unappetizing part of my dish was the overcooked, burnt shrimp...which was incredibly disappointing to me.  Since the flavor of charcoal on my tongue is one of my least favorite things, it was difficult to eat without having the acrid taste overwhelm my entire mouth.  Jo-An generously offered to exchange my last shrimp with hers.  That shrimp, was better, but still lacked flavor like its counter part the pork belly.  This in itself was again disappointing because I expected more when it came to the seafood aspect of this restaurant.


My favorite part of this course was actually the cashew forbidden rice!  It was so delicious!!  It was packed with flavor and I couldn't get enough of it!  I forgot to tell Chef David how much I loved it, but I felt like that went so well with the flavor of the pork and thought that they complimented each other so well. 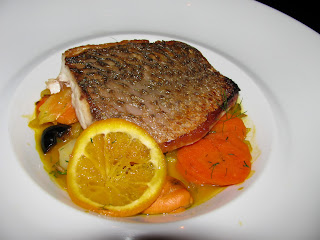 I personally love really fatty fishes, I know...big surprise!  Coming from the person who loves butter and slathers over every square inch of my bread.  Chilean seabass is one of my favorites or butter fish, but since Chilean seabass is going extinct, I can't eat it anymore.

Desserts...this was the Fromage blanc cheesecake, Ravi enjoyed it. 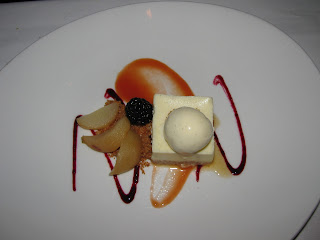 Yup, the ice cream trio was mine.  Milk chocolate, malt and black cherry. 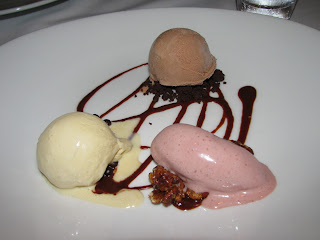 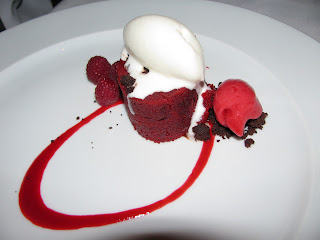 Additional jelly candies and peanut butter chocolates were brought out and were delicious!! 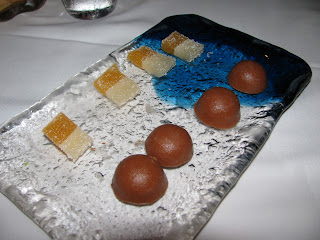 I wanted to get back to my conversation with Chef David.  When he asked me how our meal was and what dishes stood out, I told him how much I enjoyed the clam chowder and we discussed the flavors and how simple and clean it was and he told me how he made it.  Then he asked if there was anything else, and you know...I had to pause because I was debating in my head if I should just be polite and say everything was great or be forthright and give my, what I believe to be, constructive criticism of my meal.
So I went with #2.  I said...well, to be honest, my shrimp was overcooked and charred, and then we discussed the pork...which I already recounted to you the hours spent cooking it.  I did tell him my own personal preference to having my pork belly to be super tender...but again, that is just my preference.  He was very cool about it and he told me that he really appreciated my candor.  I like to believe that he was more receptive of my thoughts because I wasn't straight up bashing the food because certain elements were not to my liking, but more so because the conversation came of a place of understanding food and cooking techniques etc...
Now, my overall feelings about the restaurant and Dine L.A.?  I think the service was excellent, friendly, personable and attentive.  The food, I liked certain elements...but would like to go back to try some more of its seafood fare in order to give a true assessment of what they offer.  I think that is only fair.  As for Dine L.A. I don't know if I'm totally crazy about it...honestly.  Yes you can get food at a cheaper price...but like I said in the beginning...is it up to par with what they normally serve?  Last year, Gordon Ramsay's...we were disappointed.  I say we because foodies and non-foodies alike had the same consensus...so it's not me just being super picky or a food snob...which Lord knows I'm SO not.
Anyhow...Water Grill...I'll be back.  Chef David, if you read this...thanks for listening to my humble critique regarding your food.  I appreciate the fact that you took the time to ask and listen to what I had to say.  And I really do love that clam chowder!  =)
Email Post