empanada's place - a touch of argentina in california 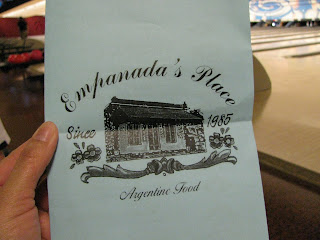 Empanada's Place
3011 Harbor Blvd
2 blocks south of the 405 fwy
Costa Mesa, CA 92626
714.825.0100
open tuesdays to saturday
11:00 am - 8:00 pm
sunday: 11:00 am - 7:00 pm
monday - CLOSED
empanada's place - a touch of argentina in california, this was what they printed on their menu...i don't want you to think i came up with that line.
so anyhow, typically wednesday nights are my league bowling nights, but because we had to pre-bowl, we ended bowling tonight.  (well, tuesday night).  anyhow...i usually leave a little early to try and avoid some of the rush hour traffic AND so that i have time to get a snack before i bowl.  i need to eat right before i bowl so that i have enough energy to last throughout the three games.  funny as it may seem, i'm always kind of excited to eat at the bowling alley...i like getting their chips and salsa and sometimes i'll have a sandwich or something.  anyhow...i was driving along, in super crappy traffic i might add, and to top it all off, i was super sleepy and all i could think about was...what am i going to eat when i get down there.  eating there is like a some weird guilty pleasure because i feel like nothing there is healthy and i'm going to be consuming loads of calories and fat. (like i don't already...but what the hell!)
so as i'm driving, thinking and talking to my friend annie, i get another call and it's eric, my team mate...and he says he's going to pick up some empanadas!  so i got really excited...he told me the different varieties and i picked a few i thought sounded good.  i'd never had empanadas from the empanada's place so i was totally looking forward to trying them.
i got to the bowling alley at the same time as my friend dave, and eric hadn't arrived yet.  i swear...i was so lethargic and tired i needed to get something to put a little pep in my step!  so i went ahead and got a coke and ordered a few things to add to our empanada feast.  i needed something fast or i'd be completely useless to my team...which is debatable since my scores really aren't that fantastic.  hahaha  but its my female presence that is required for the league.  so...you get what i mean.
when eric walked in, he looked like he was bringing us a pizza delivery.  the white box had three pieces of tape, one each side of the box and of course one in the front.  when i finally peeled off all the tape and lifted the lid, this was the lovely sight inside...12 golden, deep fried pockets of deliciousness...just waiting for us to devour them!
we ordered the spicy beef, spicy chicken and potato and cheese... 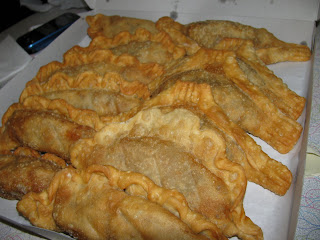 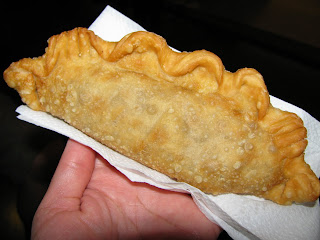 it has ground beef with peas, carrots, potatoes and a touch of northern argentina.  (i am copying that verbatim from their menu)  i've never been to argentina, so i have no idea what that might mean.  i suppose if i looked it up i might have some idea of what they are talking about.  but honestly, its 1:34 am as i'm writing this...and i still have more to write.  so moving on.
i want you to check out the inside. 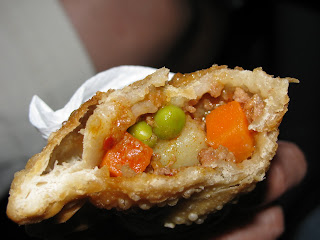 i thought it tasted good...there wasn't any particular spice that stood out for me, but the flavors were good and it did have a nice amount of spicyness to it (so perhaps i did get a feeling of northern argentina?!).  my only complaint was that there was very little ground beef in there and i felt like it was more of a potato and veggie empanada.  i would like to try these right after they come out of the fryer...nice and hot.  i say that because these are made to order, because they had to be transported, they had to sit in a box that was shut, keeping the steam inside of it, thus making the dough a bit more on the chewy side.  so i would love to eat them right after they are made to give the dough a more fair critique.  but i still enjoyed it nonetheless.  when picking our favorites of the three...both ben and i chose the spicy beef.
next, the spicy chicken (Pollo)... 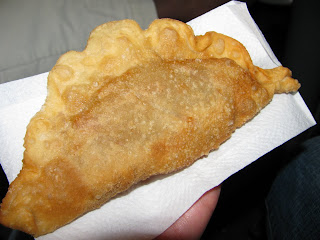 the spicy chicken has fresh california grown chicken with bell peppers, onions, tomatoes and spices.  now, if i had actually seen the menu and the ingredients inside of this, i probably would have avoided getting it because of the bell peppers which normally upset my stomach.  but since i didn't and all eric said was spicy chicken...i was like...YES!  i want that!
look at how saucey and moist everything looks... 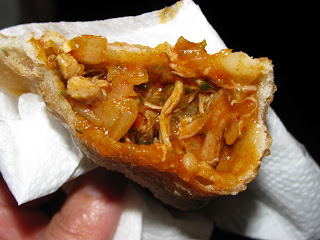 so, i actually never read the menu and when i first broke this in two, the large pieces of shredded chicken and julienned red peppers came out...and i thought...oh crap!  there's bell peppers in here!  but it smelled and looked really good.  so i started eating it...the first bite really tasted like bell pepper because of the large piece that was stuck in the middle, but as i continued to eat, the flavor lessened and i really like it.  the sauciness kept the chicken tender and moist and it had really great flavor.  it wasn't as spicy as the beef, which i was that the beef had this much sauce too, but it was really good.  while we were eating, i picked the beef as my favorite...but thinking back...i really liked this chicken too, despite the bell peppers.  this happened to be dave's favorite.
finally, the potato and cheese (papa con queso)... 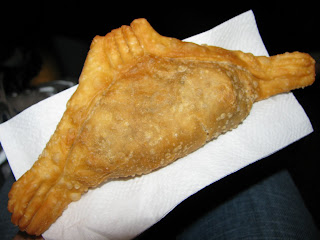 russell brown potatoes, onions, tomatoes & cilantro with mozzarella cheese. (again, i am copying what the menu says.  i have never heard of russell potatoes and am venturing to guess they might mean russet, but i will actually look this up right now in wikipedia to make sure i'm not correcting them incorrectly!  ok...there was nothing on russell potatoes...so let's just assume they mean russet.)
large chunks of potatoes, dotted with bits of cilantro... 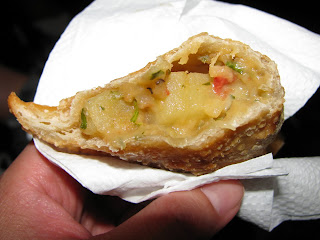 i thought this was good, it didn't have a lot of flavor for me, and really, when we first started eating, i thought that i should start with the potato then move on to the others because the other two empanadas were spicy and i knew the flavors in this one wouldn't be as bold.  but oh well.  anyhow...the potatoes were nicely cooked, the flavors were mellow and i think because of all the spicyness from the salsa and other empanadas, my taste buds were not fully functioning.  so i couldn't distinguish the cilantro flavor at first.  because i felt it needed some help, i put some salsa on it...and ben put some cheese sauce...so i did a combination of both..which made it pop with flavor.
this is eric's favorite of all the empanadas.
even though eric was bringing us empanadas, i have my ritual when i'm at the bowling alley...NACHOS!!! 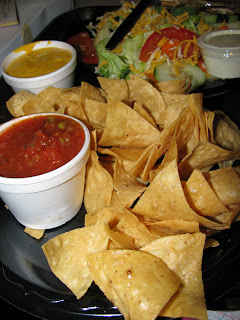 i've all but given up on trying to get the perfect nachos here at the bowling alley. poor mario, the cook in the kitchen, i think he thinks i'm crazy because everytime i try to order nachos from him i ask him a million questions on what else they can put on it!  i like it with beans, beef, cheese, tomatoes, green onions, onions, cheese (nacho cheese sauce to be exact...because its not all hard and stiff when it cools) and sour cream of course!  you get the basic idea...i like nachos with everything on it!  oh and jalapenos too!
honestly, there have been times i have asked about the different types of nachos and he always tells me no they don't have it or they can't do it.  and what frustrates me is that there was one time when my friend keith ordered it, it was so good!  and then finally last week someone ordered nachos supreme or something like that so i was like...OMG!  they DO have it!!  so i ordered it, but it STILL didn't taste the same like keith's did that one time.  i was disappointed...i'm baffled on what keith ordered.  (really how silly is this?  i just want the perfect nachos!)  that last nachos supreme i ordered last week gave me upset stomach...(perhaps its the cheese sauce...haha) and yet...i still order it like a putz!  but this time i kept it simple.
i can't help it!!  today i kept it simple like i've done in the past....i keep ordering it because they have terrific chips here...freshly made, thin, hot and crispy!  i know, some of you may be disgusted by the nacho cheese sauce...but i don't care!  i still like it! i'm not a food snob! and really...i'm at a bowing alley for cryin' out loud!  its not like i'm trying to have gourmet food!  oh!  and the salsa is nice and spicy...just the way i like it.
yes, there is a basic salad back there!  hey!  you all know how much i talk about getting plenty of roughage in your diet!  boys and girls!  i don't just preach about it!  i live it!  gotta get some type of veggies in your body...and please...i already know, iceberg lettuce is 99% water...but i ate a lot of the carrots too!  (even though you can't see them in this picture...trust me...they're there.)
i love bowling with my team and eating my nachos!  i'm not the greatest bowler...but i always have fun!!!  i think i'm the loudest person in our league when it comes to screaming and cheering.  what can i say...i'm enthusiastic!
i have digressed and strayed away from the main topic of the day...empanadas.  thank you eric for picking them up for all of us!!  they were all very tasty and i would really like to check out one of their two locations next time.  the original store is in culver city off sawtelle.  i will put the address at the end of this post.
and look!  its the end of the post!
3811 Sawtelle Blvd
2 doors south of Venice Blvd
Culver City, CA 90066
310.391.0888
i'm really hungry right now...
Email Post