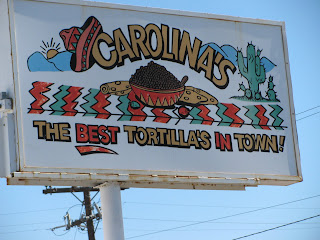 i LOVE mexican food and how could we not check out some old school mexican food while we were in phoenix?!  anna's been here before...so since she was planning our culinary tour through phoenix, Carolina's was a must!  this place has been around for 41 years and people who love great tortillas and old school mexican food without the frills come to here.  if you are coming here during lunch time, be prepared for a packed parking lot and lines of people waiting to order and eat. 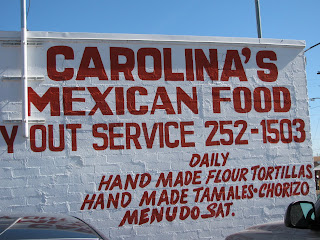 since it wasn't saturday, we couldn't try the menudo, but i have to say, annie makes the best menudo i've ever tasted!  and you must get their hand made tortillas!  they make over 300 dozen a day! 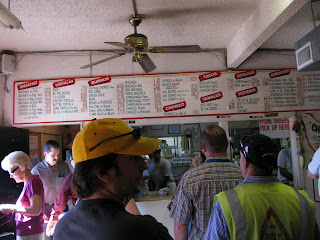 as i said, this place has been around for 41 years, but i was told that its been at this physical location for over 35 years...and they have not changed a thing!  i was actually getting my history lesson from more of phoenix's finest below. 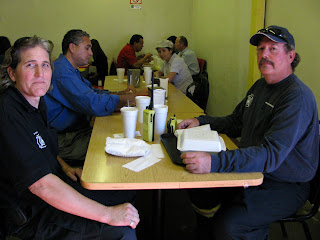 battalion chief john mure (left) and captain dave morrissey had just sat down to enjoy their lunch...when mama sylvia (anna's mama) scoped out some seats for us near them.  when i saw them, i thought..."Ooooh!  more firemen!"  (since we saw the other firemen at pete's!)  so, since i have no shame, i walked up to them and asked them if i could take their picture and ask them about their food.  i know...they look pretty serious here, (you might be thinking they are not at all thrilled to be posing for this pic) but just wait till the end of the post...haha

battalion chief john mure always gets the green machaca burrito...he says its consistently moist and loves it.  i don't know what happened, but i forgot to write down what else they ordered.  i could've sworn i did, but i think we got to talking so much that i forgot.  if you noticed in the picture of them, anna was in the far back right corner...but a few minutes of talking and after that man in blue left, we were sitting right next to them!

they were suggesting so many great places for us to try while we ate our way through phoenix!  it was so much fun chatting with them...and i really appreciated them sharing their favorite eateries with us.

the home made salsa that you can help yourself to by the soda machines... 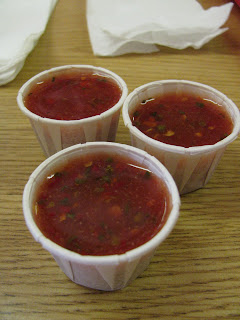 their salsa was full of herbs, oregano stood out the most to me and lots of chilies.  over all the look of it reminded me of an italian seasonings dressing.  the salsa was ok...not the best i've ever had...but it complimented the food subtly. 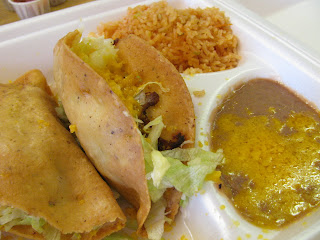 these were simple, but needed a little help which the salsa provided.  just a little hit of spice and moisture was what it needed. it wasn't overly greasy or greasy tasting either.  the beans were creamy, nicely salted...not bad!  the rice was moist, simple and seasoned. 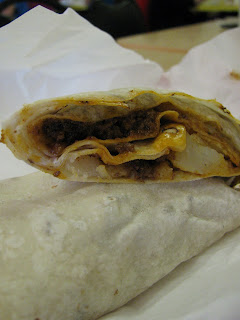 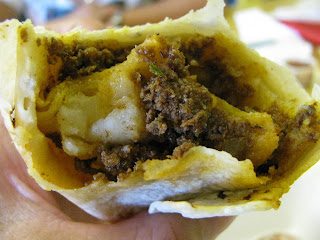 i thought this was pretty good, the consistency of the meat reminded me of ground beef, it wasn't super oily like chorizo can be sometimes. 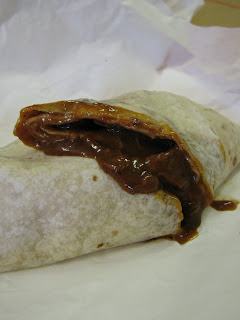 we also tried the red chili burrito...ooohhhh yum.  this was my favorite of the three main items we got.  the sauce was terrific, spicy, great flavor, creamy and slightly thickened.  excellent. 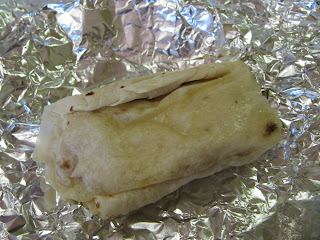 unwrapped it was a giant tortilla with lots of delicious melted butter in it!  the flour tortilla was so super ono...i and can see now why people come to buy their fresh tortillas from carolina's!

honestly, i spent the whole time talking with chief battalion mure and captain morrissey that i didn't just sit and completely focus on the food and every single spice and nuance of each dish...but i do know that i enjoyed it.  i would definitely go back and get the red burrito again AND the fresh tortilla with butter! or i'd try the cheese crisp (aka quesadilla).  i thought it was good, well seasoned mexican food and i am so happy that we went!

and to settle the coke and pepsi debate.. 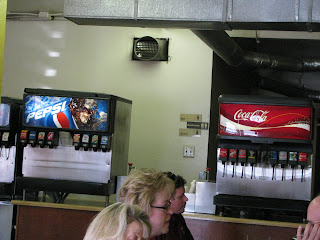 so smart...they put in both machines!  gotta love it!

see...by the end of the meal...we were best buds!!  thank you so much captain morrissey and battalion chief mure!  (i had to cover his mouth because he was eating...hehe)  thank you for your hospitality and great company! 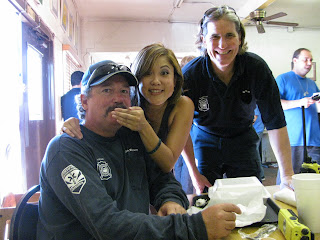