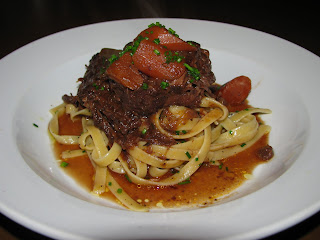 i have lots of favorite things...but short ribs is definitely near the top of that list!  yes, my list is quite extensive!  which is of course, no big surprise!  haha anyhow, i wanted to compare the difference side by side when cooking the ribs conventionally by braising it in the oven or cooking it in a pressure cooker.

what i have created here is a pinot noir/port wine short rib with chive-buttered fettucini.  first of all, these ribs were fork tender and i have to say, the conventional braising method gave me a more "melty" short rib than the pressure cooker.  it really had that time to just break down the muscles and stuff so that when you put it in your mouth, it just kind of melted on your tongue.

the pinot/port wine combo was a terrific ingredient that truly added to the depth of the flavors in the meat, along with all of the aromatics i used to cook it in.  i wanted the flavor of the meat to be the main highlight of the dish, thus choosing to keep my starch simple. although simple in preparation, the noodles were still well seasoned and were a nice compliment the ribs.  i would normally just serve it with some simple creamy, buttery mashed potatoes, but i wanted to do something else, plus, i'd been eating a lot of mashed potatoes lately...i needed a break from them!  =)

i decided to keep the sauce very rustic, but normally i would strain it and continue reducing it to thicken it up a bit.  it was incredibly rich in flavor and i couldn't have been happier with the overall outcome of the dish.

so the battle of the short rib between conventional braising vs. pressure cooker was won by the braising method which really allowed the meat to just break down, creating that "melt in your mouth" sensation.  though i will say, the pressure cooker is an incredible piece of equipment to have in your kitchen.  if i am ever in a pinch and short on time, i'd use that first and then throw it in the oven to finish off the product and develop it the way i want it to.

don't be afraid of the pressure cooker!  just follow all safety instructions and you will be fine. 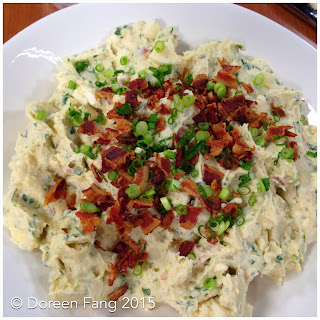