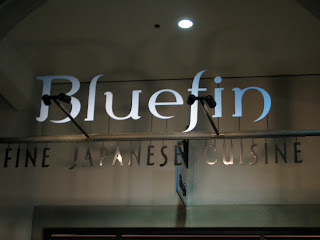 i know!  i am soooo behind on my reviews!  so i'm going to try and pound them out one by one!  first up!  Bluefin!

restaurant week was going on in orange county the second week of october, so i thought it would be great to take advantage of it, get a group together, and try out one of the restaurants we had contemplated trying.  so i made reservations for bluefin...there was a little wait when we got there, hmmmm... i like things to be punctual...but that's ok.  there wasn't really anywhere to wait inside for our group of eight, so we just waited outside.  the restaurant isn't very big, so i highly suggest making reservations if you want to eat here.

after finally getting seated we all looked over the menu and tried to quickly make our choices.  there were much more appetizing things on the regular menu that caught my attention, but so did the prices!  i stuck with the restaurant week menu choices, but did get the miso eggplant...one of my favorite things.

some of our guests, well, one guest in particular, deviated from the r.w. menu and went for some sushi...albacore and tuna and drank the rest of his dinner.  mind you, i even ate two of the albacore nigiri!  i'd die of starvation if i had six little pieces of sushi.  literally.  the dear Lord did not mean for me to eat such small portions.  i will say that the albacore was so red it looked like beef carpaccio, but it was tender, fresh and very good. 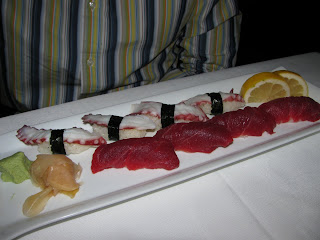 see that color?!  doesn't that look like raw beef?! 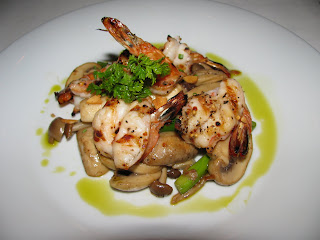 this dish was ok...the shrimp was a bit over cooked, but the mushrooms were good.  i only had a bite of this. 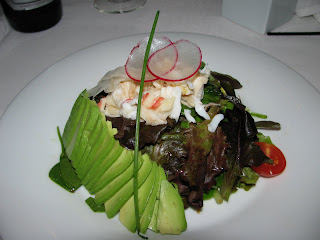 though this salad sounds so good on paper, it wasn't the same case when eating it.  it definitely need more dressing and flavor.  the king crab didn't have any flavor...this was just a mediocre salad. 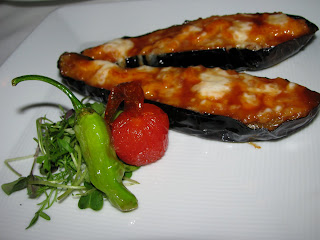 this was good...it looks like there is mozzerella on it but its just miso as far as i know!  the eggplant was cooked nice and had good flavor.  i liked this dish.  simple and well cooked. 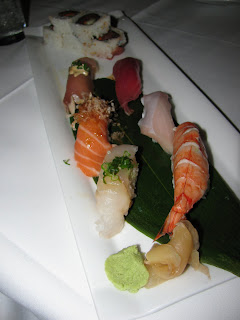 albacore, salmon, yellowtail, shrimp, tuna, halibut and spicy tuna.  this was someone else's dinner, so i did not eat any of it. 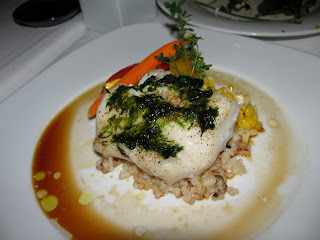 the fish was cooked nicely, but the overall dish was just so so.  they used the same sides for the other main course (steak).  do you see the little oil dots near the left bottom corner?  that's drops of truffle oil...which was probably the one only good thing about this dish to make it taste better.  i don't understand why they said brown rice risotto, it wasn't risotto, it was just brown rice, and bland and unappealing at that.  overall, even though they had this big beautiful piece of fish on there...nothing truly complimented it and made this course spectacular...the only memorable thing...the little bit of truffle oil. 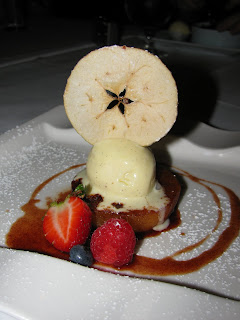 this was heather's dish, i think it was just ok for her if i remember correctly. she can correct me if she reads this. 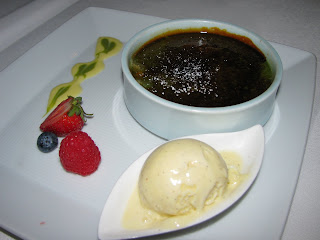 this was not a good thing...i honestly don't think that martha stewart would use her tag line on this dessert.  it had way too much matcha (a variety of finely ground green tea).  i would never order this again.

overall, my whole assessment of the restaurant and the meal we had.  i felt like they did not properly represent their restaurant with the menu choices they had for restaurant week.  i felt like they just made an easy menu with the obvious of sushi, a great fish (chilean seabass), and steak (which many people love).  and the sides...just a mere after thought and not even well done.  it was just easy to say...ok, lets make a big pot of brown rice and grilled veggies and we'll put them on either plate.  where is the effort to make it good?  that really kind of annoyed me.

the rest of the menu does have some interesting items that i would love to try, but they are pretty pricey.  i had a great time with my friends eating and  talking...but the food...really made no real impression on me.  it wasn't like it was bad, the sushi was fresh and good, but the other stuff...meh.  i just wish they had put a bit more time and effort into it...then maybe it would've been more satisfying and interesting so as to entice me to come back again.  and most of all...live up to the hype of the reviews of how good this place is. 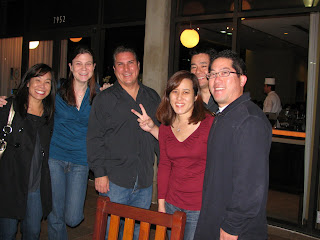 i do want to thank my friends denice, heather, barry, jen, dave, eric and phil (not pictured) for joining me for dinner.  i had a great time with you guys!