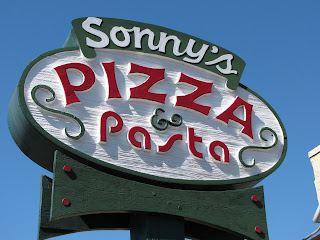 i am on a search for some great pizza here in southern california...is it possible?  i hope so!  i love all kinds of pizza, but today i wanted to find some great thin crust pizza.  i love ny style, but no one really wanted to drive down to san diego so we headed to san clemente.  all i knew was that these pizzas are from italian restaurants.  so i was being completely open to whatever we ate.

sonny's wasn't even on my list of places to try, but my eating partner for the day, dave, had quite a few recommendations from friends and coworkers that this place was awesome!  the reason why we came down to san clemente was because another friend phil, recommended tina and vince's italian deli for some great pizza.  (and take home raviolis)

after a bit of searching, we found it! 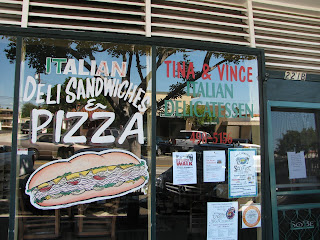 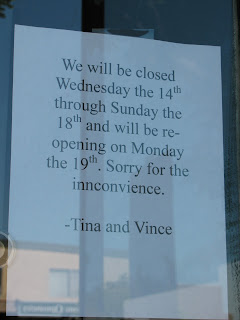 what the...  no no...no inconvenience tina and vince.  you guys work hard, so i hope you actually enjoy your mini-vacay!   restaurateurs have a very tough life...so it is well deserved.

next door we were distracted by a store called waraku, we were informed that all the clothes and shoes came directly from japan.  so anyhow...we met these ladies in the store that also recommended sonny's and they said the garlic bread was awesome and super garlicky.

THEN on my facebook, another friend  said sonny's was her favorite too!  so with all these great recommendations, we headed off to the restaurant which was just down the street from tina and vince's and got the last parking space in the lot and headed in to eat.  woo hoo!  love good parking karma.

it was such a gorgeous day, so we sat outside on the patio and started to decide what we wanted to order, of course pizza was number one on our list.  but what kind should we get?  typically when i am searching for great pizza, i'm a bit of a purist, and i normally just get a cheese pizza so that i can get a good sense and taste of the crust.  since we all know that THAT is the key to all great pizza.  since it wasn't just me...we decided on the pizza margherita.  their most popular pizza in the roman orgy...but with all the toppings that go on that pizza, i don't think the crust can handle it and it would become soggy.  but i'll get more into the pizza in a little bit. 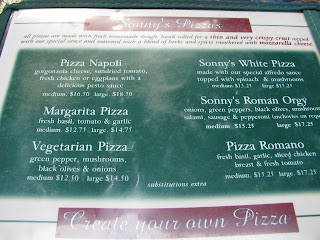 someone also mentioned the creamy house dressing was terrific, so we got a basic house salad with the creamy italian, a side of garlic bread and a side of meat balls (my best friend LOVES meat balls, so i wanted to check them out for her...since right now, the best ones we've had are at Nora's in las vegas.)

out comes our salad... 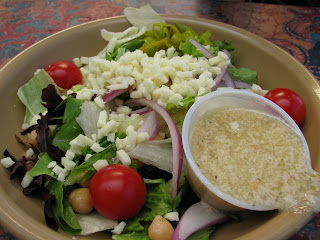 nice combination of lettuces, garbanzo beans, julienned red onions, mozzerella and cherry tomatoes.  i picked out a few very large pieces of rotten lettuce, which the waitress later saw on my napkin and apologized for.  the dressing as you can see, is not necessarily creamy, its more of what i would called a broken dressing.  that's when everything just separates and doesn't stay emulsified.  the dressing was quite garlicky, but it completely lacked salt, so it didn't have much taste at all, it was alright.  the salad was just ok. 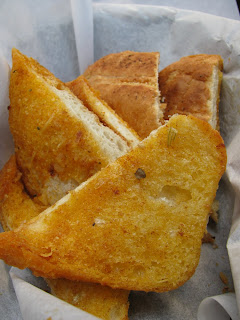 the lady at the store said it was super garlicky, but these first top pieces didn't have much garlic bits on it and i really felt like the garlic flavor came more from powdered or granulated garlic vs. fresh.  but you can see the little flecks of what looks like dried onions.

the bottom pieces were more saturated in oil/butter... 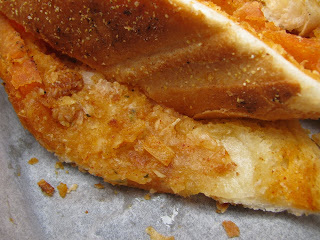 here you can see more bits of garlic.  the overall taste of this bread wasn't at all dominated by just garlic, in fact it tasted a lot like onion and herbs to me.  whatever they used, which i think is a lot of dried onions and powders, leaves a bit of a funky after taste.  its not how i normally want my garlic bread to taste.  so, again, this was just ok.  everything so far that i'm saying about the salad and bread, dave agreed with me. 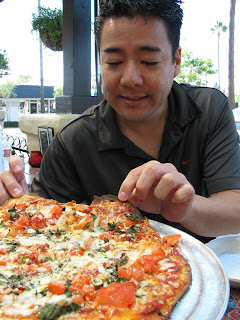 just another view of the pizza and all the ingredients on top... 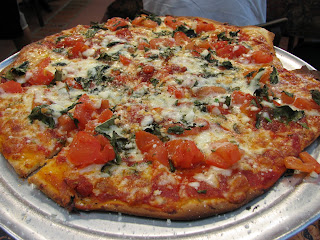 do you see those giant chunks of tomatoes?  the crust looked like it would be crispy and crunchy.  hold on, lets back up and talk about the tomatoes again.  there is a reason why many places actually put sliced tomatoes on there vs. chunks...and i believe the reason is that it sits more lightly on the pizza and doesn't weigh down the crust.  when you put these giant chunks on there its so heavy that the crust cannot withstand it, plus it also gives off too much juice making the crust soggier.  thus, making it very difficult to pick up the slice to eat.  i will say that they were incredibly generous with their toppings, but it was almost too much for a pizza margherita.  one of the things when getting the margherita is that it is such a simple pizza and sometimes, less is more.

dough dough dough...making a great dough is so hard to achieve.  so when it came to the crust...dave and i were really disappointed, it wasn't super crispy, and could've been just a hair thinner.  it was definitely better closer to the edges.  i did in fact take all the toppings off so that i could truly taste just the crust...and it was just...not good.  i think they use so much toppings and flavors so it masks the mediocre crust.  i'm going it keep it brief...it tasted like cardboard to me. i took me awhile to figure out what it was that i was tasting, which wasn't a whole lot. but when the word cardboard popped into my head...*sigh* that's what it was.  i'm very sorry to have to say that.

i'm so sorry tracy...i wish i could say something nicer so far...but, it isn't going so well at this point! 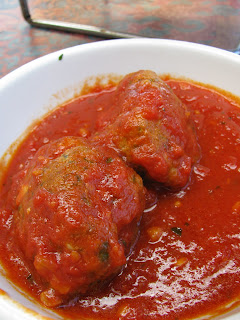 a side of meatballs, two in a bowl of marinara. 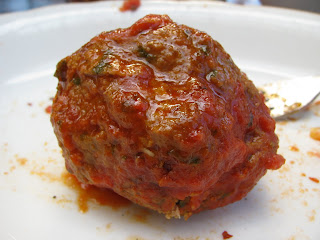 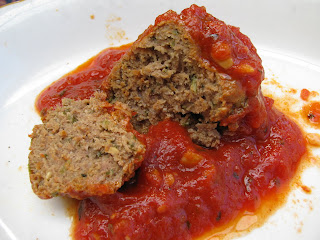 i opened it up so you can see all the herbs and texture of the meatball.  let's start with texture, this was tender, but it was very mealy to me.  they had a ton of herbs in there, which tasted a little strange to me, and i couldn't pinpoint what the actual herbs were...the marinara was ok.  from everything we tasted, i think they like to use a lot of dried herbs (nothing wrong with that), but they are very heavy handed with it as well which then becomes too overwhelming and overpowers everything.  i love herbs, but not like this.  like i said earlier, i still think the best meatballs i've had so far are from Nora's Italian Cuisine in vegas...tender, flavorful, but not over seasoned with herbs.

dave and i were not that impressed with our whole eating experience.  we saw some great looking pastas that other people ordered, which i wouldn't mind trying if i ever went back.  but i wouldn't order a pizza from here again, nor would i probably get any of the other things we had.  they do use a lot of garlic, which i could taste in my mouth for hours later on.  i know people love garlic, but i don't believe you should cover everything in garlic...at least that's my opinion.  i like other flavors besides garlic in my food.

honestly, i really want to find places that other people enjoy so much and be able to say that i loved it...but i can't, not with sonny's.  it was just ok food for me and dave, and again, we both agreed...not worth the drive.

for those of you who love it...i know you won't stop going and i'm sorry i don't feel the same way.  there is another recommendation for pizza in san clemente, possibly rocco's...so i will try that and tina and vince's next time i head out there.   as for driving a far distance...i'm going to make that trek down to san diego to try pizzeria luigi's one day soon.

the search for the ultimate pizza in southern california continues...