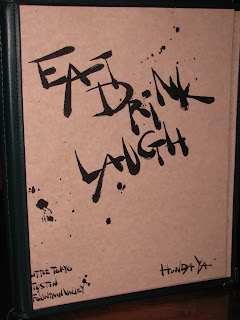 first course was our albacore tataki with fried garlic chips and julienned white onions in a very light ponzu sauce. 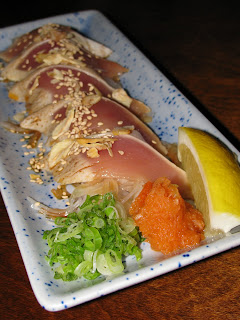 this dish is always delightful...what i appreciate most about the dish is the textural contrasts that they create, the softness of the fish against the really crunchy garlic chip, and then the onions, still with just enough crunch because its not julienned so fine that it loses its "body". also, i love the onions even more because they were soaking in the sauce which just gives the dish so much more flavor. the extra touch of adding your own green onions and i think its more garlic, i am actually unsure what the orange thing was on the side, but it was all good together. how sad that i don't know what that was, but oh well...i will ask next time i'm there. oh! and of course, the squeeze of lemon, the citric acid is always such a nice compliment to seafood.

the food was starting to just fly onto our table...next to come out was our rainbow roll... 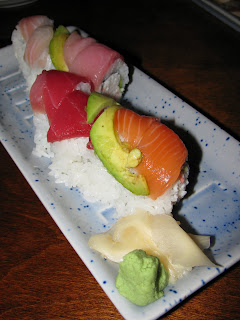 this is my sister robin's favorite, so she ate most of it.  i did have this little end piece with the salmon and avocado.  it was fine.  not much to say about it.  ok, i will say this, its not even really about the sushi itself, but i used to hate salmon...at least cooked salmon.  i can't stand the smell of it, nor the really strong taste, but after i had the salmon and avocado roll at hachi, i totally fell in love with raw salmon.  every once in awhile i will eat cooked salmon but it depends on who's making it for me, but i'd never go out and order it.

next came our yasu nisu (i think i'm spelling this wrong), its the sauteed eggplant 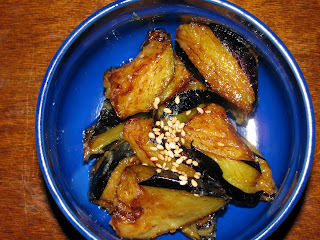 i love this dish.  its very simple, nicely flavored, i think its with a touch of miso.  cooked perfectly, just soft enough, but not like baby food.  i could eat like 4 bowls of this.  sometimes it comes out with a little more "sauce" around all the hot pieces of eggplant, but it was still delicious.

when i was growing up as a kid, my mom used to make eggplant and i did not like it at all (to put it mildly).  i thought i looked creepy and weird...but i am so thankful that i discovered how wonderful eggplant can be when cooked properly.

one of my all time favorite eggplant dishes was when i was in vegas, at the golden nugget, when i used to have a casino host.  i'm talking way back when they still had that chinese restaurant upstairs.  anyhow...the only time i went was when my casino host invited my friend esther and i to join him and some buddies for dinner up there.  when the eggplant dish came out, it almost looked like little green sticks, they had peeled the entire eggplant then cut it up and cooked it.  i can't even tell you what they cooked it with, but all i remember was that it was so hot and perfectly tender and just seasoned so beautifully.  i love love loved that dish.  i never ate it again, since that time, plus the restaurant is no longer there...haha  but it was so simple and so amazing.  i wish i could have it again and share it with all of you eggplant lovers.

sorry to digress, NEXT!

potato salad...that day, there were very few chunks of potatoes.  it was very soft and didn't have much texture to it.  strange...i wonder who was making it that day.  its like all the potatoes might have been overcooked and disintegrated.  it still had good flavor though. 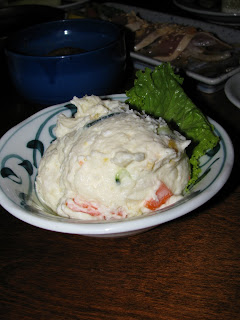 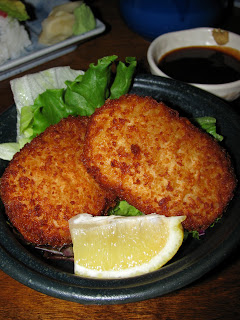 can you see how dark it looks, almost like a hash brown?  well, i have to say, normally they make a really nice croquette, lightly fried and so creamy on the inside.  today, it was totally over fried, and the inside tasted like it was just dry mashed potatoes.  i don't know who was in the back making these little babies, but they did a crappy job and i was very unhappy with the end result.  i was nothing like it normally is.  so, totally disappointing.

up next was the stewed kabocha (japanese pumpkin) 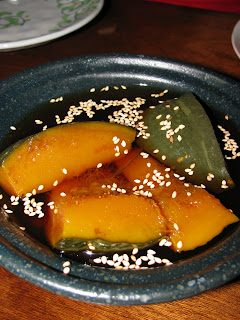 i don't normally eat this, but i did try it.  this dish was served chilled in a dashi broth which was really light and flavorful.  the kabocha was very sweet and cooked just right, nice and tender.  i actually enjoyed it and liked the combination of the sweet pumpkin with the light dashi (fish broth).

robin felt like having some salmon onigiri (rice ball) 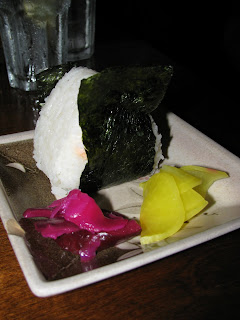 i am unable to  comment on this because i didn't try it.

i know, what you're about to see isn't necessarily all the pretty to look at.  but don't judge a book by its cover.  this is half an avocado covered with a mayonaise mixture of shrimp, crab and scallops.   on the menu it said just shrimp and scallops, but i actually saw crab and didn't see any scallops.  so whatever the case...  this dish came out to us flaming...and it went out on its own. 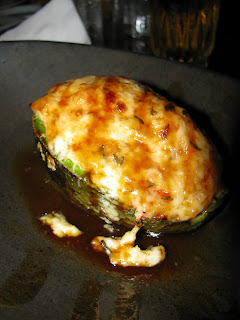 the brown sauce was just teriyaki sauce, which was such a wonderful compliment to each bite of the creamy avocado and the seafood mayo mixture. 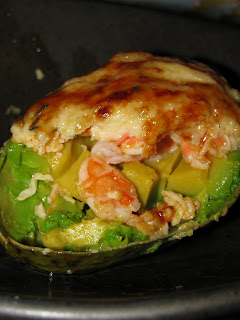 attention to detail...if you look closely, you can see that they have already precut the avocado so that it makes it so much easier to spoon out.  i like that.  always thinking about about how to make it easier for the customer to enjoy the food. 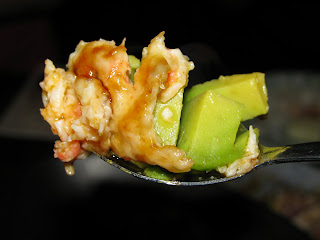 though it may not appear like some amazing work of art, this was a really fantastic idea and my sister's and i thoroughly enjoyed every luscious, creamy bite of it.

ok, at this point we are getting pretty stuffed...and all that was left was our tempura...renkon (lotus root) and kisu (white fish). 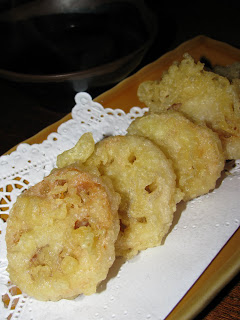 after a long intermission from our food, the renkon tempura finally arrives.  i know...doesn't look super pretty or light in the batter...but nonetheless, when you mix all the grated daikon into the tempura sauce and you dip it like chips and dip, it is so good.  i love the crunchiness you get from the lotus root itself, along with the tempura batter, but the sweetness from the sauce helps cut some of the grease from being fried and it is such a wonderful taste on my palette.  i love this dish...every single time i get it.

as for the kisu (white fish)  they are fat little babies that day! 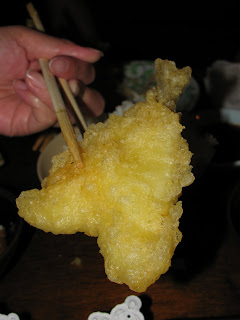 much bigger than normal!!  all four pieces of fish were fatties!  perhaps because i was getting full, and this was the last thing to come out, i struggled a little with it.  it felt a bit greasy to me, but it was ok.  perhaps if i got this in the beginning when i was starving i might not have felt the same way.  but again, when dipped in the daikon tempura sauce, it helped cut the grease and made it much more enjoyable.

we ordered a couple of bowls of green tea ice cream to end our dinner... 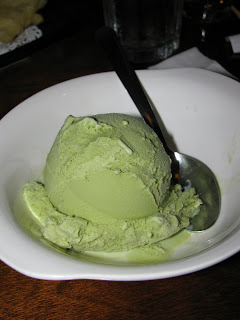 overall, we had a lovely dinner.  the thing with honda-ya, is that it is not always consistent in how the food is prepared at times.  which i pointed out about several of the dishes.  but i do enjoy eating here very much.  i have been told to try some other izakaya type restaurants and am totally looking forward to adding more "must eat" places to my list.