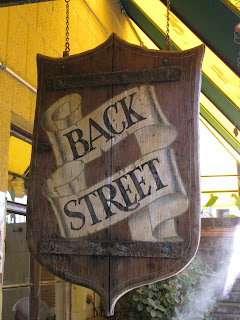 this little sandwich shop is a quaint little gem hidden in riverside.  so often i just want to get a good sandwich in a nice outdoor environment...  who would've thought it would be in such a hot place like riverside!?  but i loved it, the terrific garden patio environment, covered and shaded, misters going.  it was such a lovely place to enjoy a nice lunch and catch up with my friend janelle and hang out with the kids.

the staff is so friendly, kitty was outside watering the plants when we were leaving...but she's typically inside ringing everyone up. 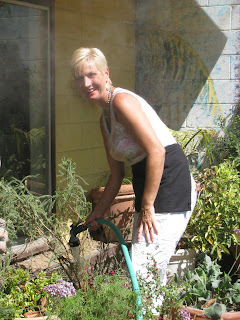 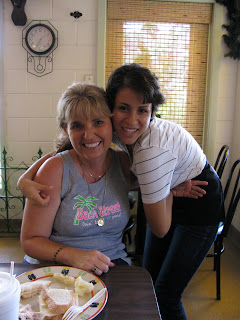 rebecca helped up out into the garden after we had ordered our food, paid and got some of the goodies from the "sides" bar.  i loved the personalized service...she also brought out our pies after we were seated and eating.

savannah was behind the counter helping us pick out our original side to go with our sandwich, whether it was baked bean, potato salad and a few other choices i can't remember.  we had two kids with us, so i wasn't as focused on food as i normally am.

when we were taking this picture, they finally had an opportunity to sit down and enjoy their lunch.

janelle got the pastrami on rye with potato salad, and got a bit of the pasta salad and some beets from the side bar. 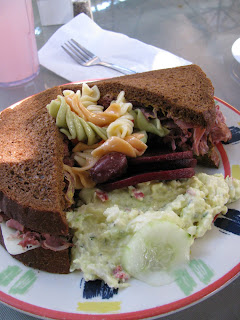 a closer shot of the sandwich after she took a few bites... 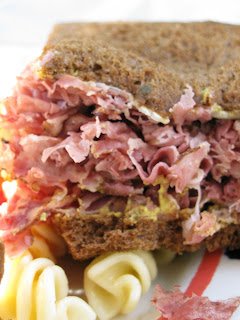 i did not get to try the sandwich...but janelle really seemed to enjoy it.  we were busy with two kids, so we kind of just ate.

i had a tuna sandwich with cheese, which was swiss, on squaw bread and a side of potato salad. 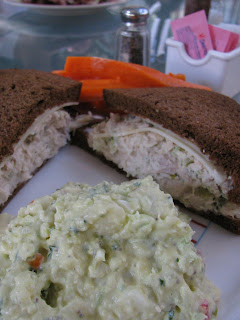 it was a good basic tuna sandwich, nothing weird inside, all i needed was a bit more pepper in it.  it was slightly watery so it was dripping out when i was eating, but besides that...it was just a nice sandwich.  the potato salad was good, i like it kind of sweet sometimes, so if you like with relish, then you'll like this potato salad.  they were super generous with the portions.  i just got some carrots from the side bar, i was too focused on the kids and us getting outside and sitting down.

what is lunch with some dessert...we got two different ones.  below is the chocolate tart with lots of fluffy whipped cream and a sprinkling of powdered sugar. 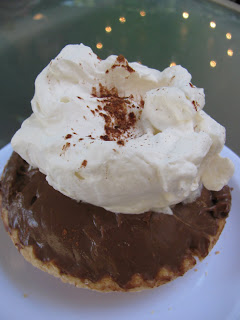 this reminds me of making chocolate jello pudding pie.  which just makes me happy and reminds me of being a kid.  the whipped cream wasn't overly sweet which was great.  the crust wasn't a flaky dough, but more like pate sucre.

my little eating buddy opted to pass on lunch and go straight to dessert which brought a huge smile to his face.... 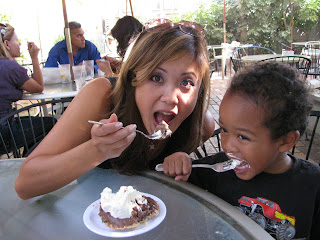 i think its safe to say that the whipped cream was his favorite part!

we also picked their most popular dessert, a banana cream pie 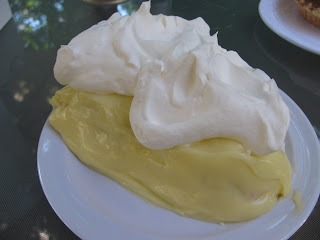 i know, it looks like a giant banana custard blob, but there realy is crust under there, again the fluffy whipped cream.  now...i'm allergic to banana, go figure, but since i take my allegra 180 everyday, i decided to risk it and try it!  haha  it was very mellow in flavor, nice.  but honestly, even when i wasn't allergic to banana when i was younger, i never had banana cream pies, so i can't compare it to anything.

now, i decided i wanted to see if i can improve upon this dessert, so i started taking a little bit of the chocolate pie along with the banana cream and eating it together.  who doesn't love chocolate and banana?!  haha  i made janelle eat it like that too.  haha 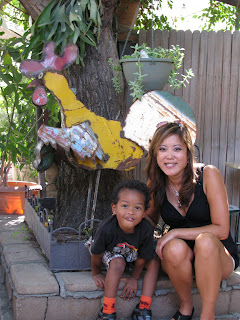 and i caught one of him while he was playing by the fountain. i loved the ambiance and would love to come back and enjoy another relaxing lunch here. 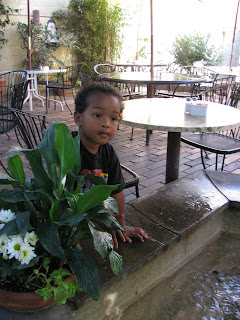 i liked the homey atmosphere and how comfortable it was.  i enjoyed the home made sandwiches and the people that prepared it...with love and care.  the hospitality there was so refreshing, something you won't get at subway.  thank you janelle for sharing this little gem to me.  (thank goodness for gps or we never would've gotten there!)  haha